The Little Red Lighthouse, officially Jeffrey's Hook Light, is a small lighthouse located in Fort Washington Park on the Hudson River in New York City, under the George Washington Bridge. It was made notable by the 1942 children's book The Little Red Lighthouse and the Great Gray Bridge by Hildegarde Swift, illustrated by Lynd Ward. The lighthouse stands on Jeffrey’s Hook, a small point of land that supports the base of the eastern pier of the bridge, which connects the Washington Heights neighborhood in Manhattan to Fort Lee, New Jersey.The first attempt to reduce Hudson River traffic accidents at Jeffrey's Hook was a red pole which was hung out over the river. A 10 candle-power light was added to the pole in 1889 to help warn the increasing river traffic away from the spit of land at night. The land around Jeffrey's Hook was acquired by the city in 1896, and later become Fort Washington Park. The current structure was built as the North Hook Beacon at Sandy Hook, New Jersey, where it stood until 1917, when it became obsolete. It was reconstructed at its current location in 1921 by the United States Coast Guard as part of a project to improve Hudson River navigational aids, and originally had a battery-powered lamp and a fog bell. It was operated by a part-time lighthouse keeper. When the George Washington Bridge was completed in 1931, however, the lighthouse was considered to be obsoleted by the bridge's navigational lights, and the Coast Guard decommissioned it and put out its light in 1948, with the intention of auctioning it off. The proposed dismantling of the lighthouse resulted in a public outcry, largely from children who were fans of the 1942 children's book, The Little Red Lighthouse and the Great Gray Bridge, by Hildegarde Swift. This led to the Coast Guard deeding the lighthouse to the New York City Department of Parks and Recreation on July 23, 1951. The lighthouse was listed on the National Register of Historic Places as 'Jeffrey's Hook Lighthouse' in 1979, and was designated a New York City Landmark in 1991. In 2002, it was relighted by the city. Public access to the lighthouse is by the Hudson River Greenway, reachable north of the George Washington Bridge by a footbridge across the Henry Hudson Parkway at West 182nd Street and Riverside Drive, and south of the bridge by a footbridge at West 158th Street. The northern path is very steep immediately north of the bridge, while the southern path is flat. Tours of the lighthouse are given on an infrequent basis, arranged by the Parks Department's Urban Park Rangers, especially on the Little Red Lighthouse Festival day in mid-September and Open House New York day in October.Published in 1942, this children's book uses the story of the building of the George Washington Bridge next to the small lighthouse to affirm the idea that even the small are important. The book begins by introducing the lighthouse and its job of warning the boats on the busy Hudson River of the rocks nearby. Every night a man climbs up to the top of the lighthouse and turns on its flashing light. When there is fog, the man additionally turns on the lighthouse's fog bell. The lighthouse is pleased with and proud of its important job. In the middle section of the book, the lighthouse watches, mystified, as men build a great gray bridge right next to it. When the bridge is finished, it towers above the lighthouse, which now feels small and unimportant. Even worse, one night a light begins to flash atop the bridge's tower, and the lighthouse is convinced that it is no longer needed. That night, a storm whips up and fog clutches at the boats. But the man does not come to activate the lighthouse, confirming its fears that it will never shine again. But the boats cannot see the light high atop the bridge, and without the lighthouse's light or bell, the 'fat black tug' crashes upon the rocks nearby. The bridge calls to the lighthouse, reassuring it that it is still needed, 'each to his own place.' The man finally arrives, complaining that some boys had stolen his keys. The lighthouse resumes its job, glad that it still has work to do. Though it now knows that it is small, it is still very proud. The book ends by encouraging the reader to go to Riverside Drive in New York City and 'see for yourself' the lighthouse next to the bridge. The 'great gray bridge' is clearly the George Washington Bridge, though it is not named in the book. Construction on the bridge began in 1927, only six years after the lighthouse was erected at its current location, and concluded in 1931. 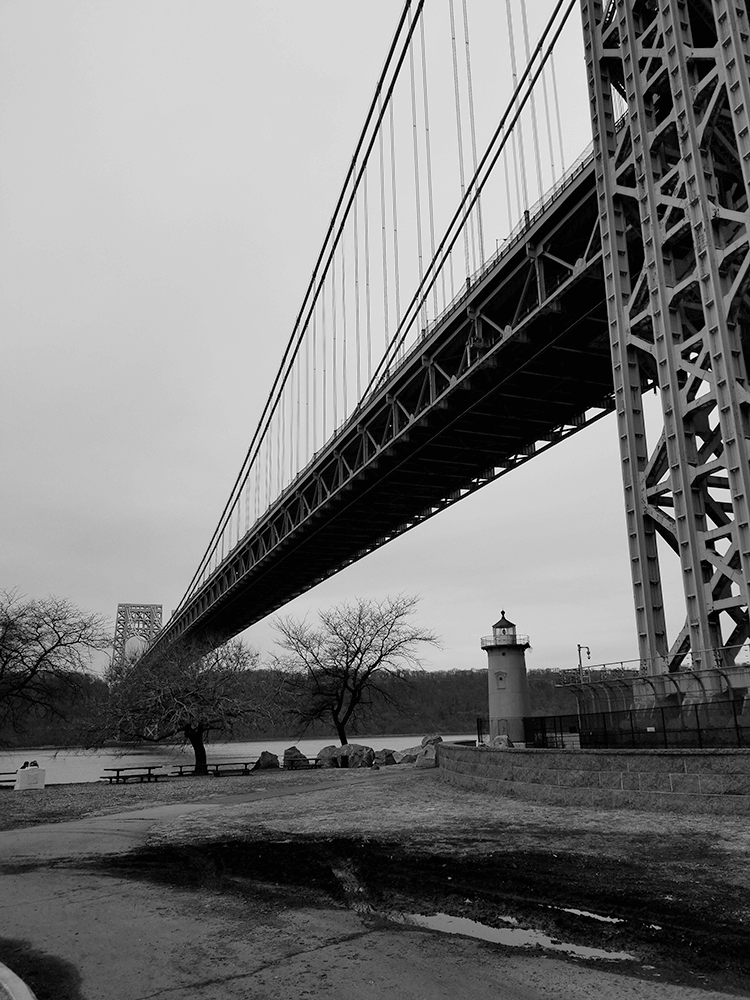